We were invited to stay down the coast at Coledale with some friends for the weekend. This was my first ‘overnight’ ride and I was fretting about how much (or little!) I could pack into the very small panniers on the S1000.

As luck would have it, a friend offered us the use of his Ducati Multistrada. Much bigger panniers, so I was happy.

It also has a larger and more comfy seat than the S (I know, doesn’t everything…?) And handles!  All my dreams are coming true at once ;) 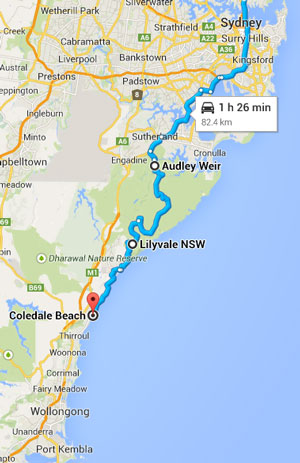 Sydney to the South Coast via the Royal National Park

Getting down to South Sydney can be pretty slow and annoying in the traffic, especially on a Saturday.

But then we turned off to the Royal National Park and found we were mostly just sharing the road with other bikes.

Zorro took it fairly easy, being an unfamiliar bike for him too. And we were only half way through when other riders began to give the signal of a speed trap ahead.

Finally, just as we came out to Otford, we saw the line of police cars and – quietly – pulled over and parked. We wandered smugly across the road to the Otford Apple Pie Shop and settled in at an outdoor table to watch the spectacle. 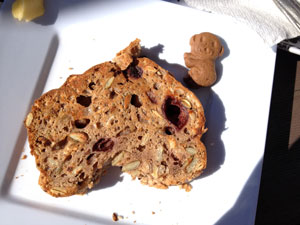 Koala biscuits and Aussie banana bread, from the Otford Pantry

While I munched on banana bread (rustic homemade style, and almost in the shape of Australia too!) and Zorro had bacon and eggs, the cops pulled over a string of bikes, mostly checking for compliance.

Occasionally you’d hear the bellow of a bike coming over the hill who obviously hadn’t got the signal, and the cops would get themselves ready. 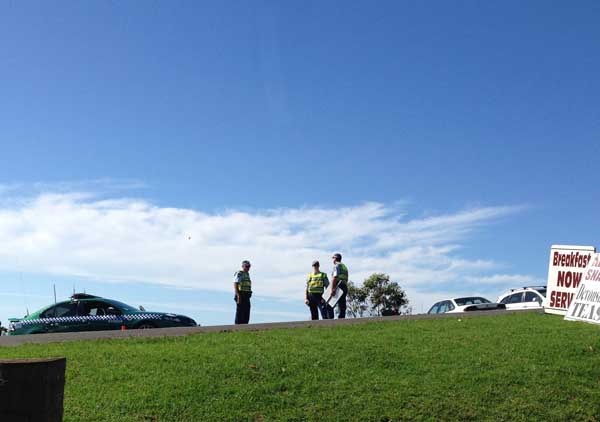 Then it was time to head south along the spectacular Sea Cliff Bridge and into Coledale.

My thoughts on the Multistrada

Yes, it was definitely a comfier bike for a pillion. But the initial comfort gave way to a few niggles on this hour-and-a-half ride. 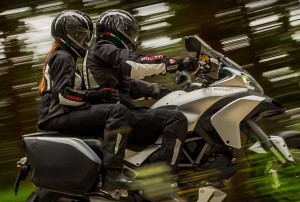 But it was still a fun ride and I enjoyed being able to compare these two very different bikes.

There was a huge storm raced in late on Saturday afternoon. We had a brilliant view of it from the deck overlooking the ocean and it was amazing to see how quickly it changed from hot and sunny to ferociously dark and windy, then back again (with a brilliant rainbow).

Just glad we weren’t on the road at the time!

On the Sunday we headed back mid-morning, before it got too hot.