Zorro and I aren’t always the best at good, clear communications. We are good at blaming each other for misunderstanding. When we’re on the bike and competing with the noise of the engine, wind and tyres – and through impenetrable helmets – communications can be, well, interesting…

We started out with the best intentions and the aim of keeping it simple.

A double squeeze of the knees means “I’m ready”.

Tap the lower leg on one side or the other to indicate which direction to turn.

Squeeze the shoulders once for “slow down”, twice for “hey this is fun”.

Hit the rider on the back for anything too scary or dangerous.

Sounds good in theory and we have stuck successfully to the first two points.

But the first time I spotted a police car I squeezed. Everywhere. At least 5 times. Fortunately Zorro had seen it himself. There’s no way he could have interpreted my frantic antics.

And really, when I’m hanging on for dear life, lifting a hand to whack him is pretty counter-intuitive.

As my pillion style has changed, I now often have my fingers inside Zorro’s jacket pockets (I initially tried that as a way of keeping my hands warm one cool morning, but then found it offered a comfortable grip too).

So now if he’s speeding, I pull a little with both hands, digging my fingers into his gut. He seems to comprehend that one!

We’re hardly new to this gig of communicating through gestures. And in situations that might be life-threatening.

We’ve been SCUBA dive buddies for several years and have tried to create a common signalling system underwater.

Some are easily understandable, like “oh look, there’s a shark/turtle/cuttlefish”. But “I’m getting cold, let’s swim around this coral bommie to the mooring rope and do our 5 metre safety stop until we see the boat come back” often just ends with a nasty middle finger gesture. “What the ?” 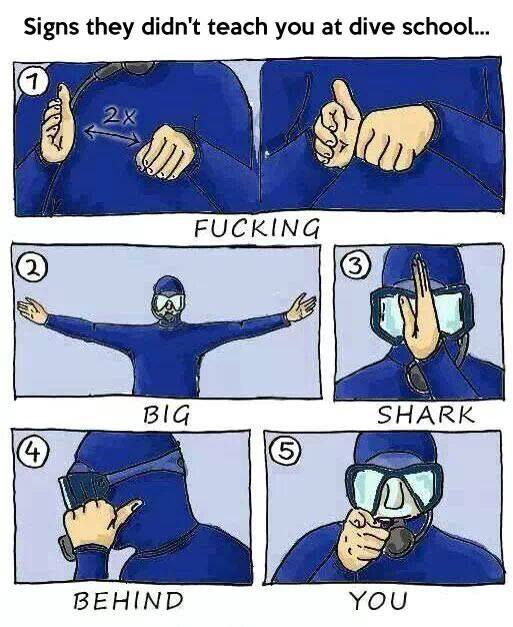 How to communicate with hand signals

Of course, it’s just as difficult, perhaps more so, for the rider to communicate to the pillion.

Zorro will grab my hand and wrap it around him if he’s planning to accelerate hard.

He’ll squeeze my leg gently to ask “All good back there?”

But apart from these, we usually wait until a stop light, lift our visors and talk. Loudly.

(Under any other circumstance, raising my voice is met by a stony glare from Zorro, but sometimes on the bike yelling is the only option.)

And so it was a great relief that we had the use of a borrowed pair of intercom headsets on our weekend ride to Coledale last week. The Scala Rider motorcycle intercom by Cardo Systems allows you to talk to each other easily.

And when you’re sick of talking, you can switch it to play radio or your mp3 music via Bluetooth from your phone.

Which came in handy when Zorro started to sing…

But seriously, it was nice being able to chat along the way, point out things as we passed, and share a bit more of the journey. Without having to worry about how many squeezes of which limb were needed.

I had trouble remembering which button to press for various functions, so would inadvertently cut comms off at times, or interrupt Zorro’s music by mistake. But with a little practice I’m sure they’d prove their worth.

Meanwhile, on our short day trips, I’m kind of happy to sit without the chatter.

Just listening to the hum of the bike.

Feeling my arms around him as I press against his back.

Soaking up the surroundings.

« Mixing it up with a multistrada
Escape to Mangrove Mountain »