Sadly, the stunning weather from Easter didn’t last through to the following weekend (another long one).

ANZAC day dawned wet and our planned ride up to Mt Victoria fell through. We drove the car instead, in convoy with some other bike friends.

The winding journey up Bells Line of Road is a favourite with bikers on the weekends – and truckies on weekdays.

Being a public holiday, it was jammed with cars.

By the time we’d crawled through two major accident sites and found ourselves in thick fog at the top of the mountain, I was very glad we hadn’t come by bike.

It was also down to 12C, and that’s a good 6 degrees lower than any trip I’ve made so far on the back.

It feels like I’ve only just bought my summer gloves and it can’t possibly be time for winter ones yet. Literally the day before (I swear) I was swimming at the beach and it was 29C.

There were bright autumn leaves dotted everywhere along the way up the mountain, a constant reminder of the changing season. On such a dull day, the yellowing leaves were like little bursts of sunny brightness, but my favourite are the deep, brilliant reds. 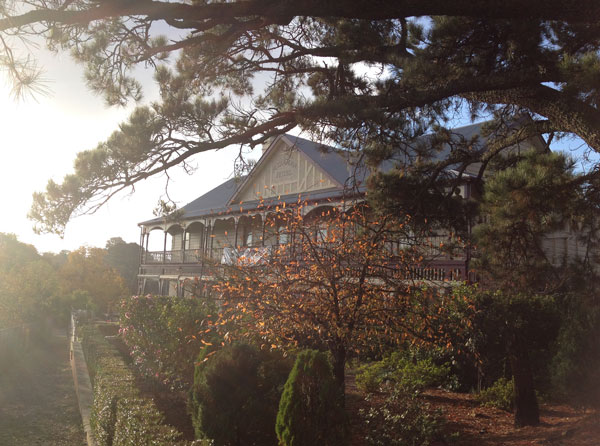 The Alex Hotel at Leura on a misty ANZAC Day 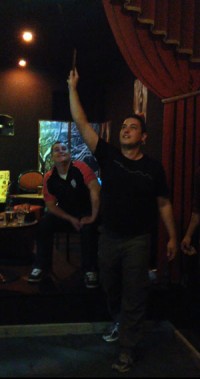 Two-up at the Alex

Being ANZAC Day, we settled for Two-up of a different kind. April 25  is the one day of the year when it’s legal to play the gambling game called “2-up”.

The Alexandra Hotel at Leura had a good vibe going around the 2-up stage.

Zorro started on a long winning streak, but when it turned into a losing streak he had the sense to call it quits. We left with some extra notes in our pockets, having had a fun afternoon. 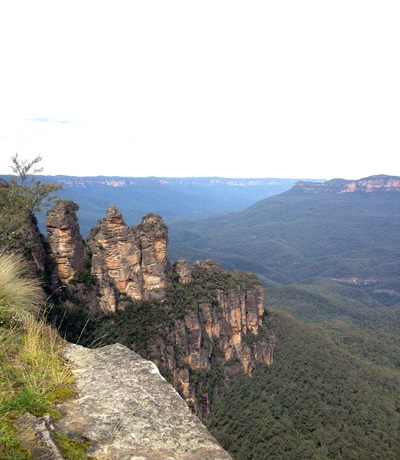 The Three Sisters – no fog today

After an overnight stay in Leura, the weather had dried up and the views of the valley reappeared.

So we did the standard tourist trail on the Saturday.

Then headed back down the mountain, again via Bells Line, again with too much traffic.

Another Pie in the Sky

The Pie in the Sky Roadhouse at Kurrajong Heights beckoned on the way. I think this place is the sister of the Pie in the Sky at Cowan and has a similar pie selection, with the addition of apple pies made with local Bilpin apples.

The place is popular, and deservedly so. Their pastry is golden and flaky, although we found the beef pie filling a little gelatinous on this occasion.

There are a few tables and chairs out the front and also on the grass, which would make it a nice bike stop.

We couldn’t resist taking our friends along to the seafood place in Windsor that we discovered last week.

We bought some beers from across the road at the Macquarie Arms Hotel (which carries the distinction of being “the oldest pub in Australia” – still standing, anyway) and enjoyed those with our platter of fish’n’chips.

Our friends agreed that it’s better than most found in Sydney.

There seems to always be motorbikes parked outside the Macquarie Arms, so we still had some shiny bikes to admire and talk about over lunch.

At that point I regretted not having our bike (note the new use of “our”), but I have to say, I was glad of the weather protection afforded by the car.