Bad weather, late boozy nights and a bunch of outstanding chores all combined to prevent us getting out on the road on the weekend. So I was pretty happy that Zorro’s work had decreed the Monday to be a corporate ‘picnic day’. Especially when the day dawned clear and crisp.

Autumn is definitely making itself felt in Sydney now. I zipped my warm lining into my jacket for the first time and made sure all the vents were closed against the cold.

It was about 14C when we set out, but I felt snug enough with a scarf around my neck and my hands tucked into the leather pockets on Zorro’s jacket.

Monday traffic heading away from the city was blissfully light compared to weekends. We rode to Terrey Hills and turned off to West Head.

Surprise! The National Parks entry point was open and manned. For once.

Zorro turned the ignition off as I scrabbled with gloved hands to find the $11 entry fee, giving him time to chat to the ranger on duty.

We were told that sections of the road down to Akuna Bay had been “done up” and wouldn’t be too bumpy. Even better, he said the café was open down at the waterfront (wow, even on a Monday!) and was under new ownership.

We headed down the hill. I’d found myself a good pillion position and sliding forward a bit less, realising I could grip more with my knees and thighs, and apply some pressure on the pegs.

On the downward bends, I began to play with the feeling of tensing just the inner leg as we went into a corner, then the other on the opposite turns.

It was feeling good.

At least until Zorro informed me that it didn’t feel so good for him.

Apparently those minute amounts of pressure are enough to steer the bike, beautifully balanced beast that it is.

So much for that experiment. I didn’t realise being a pillion would be so scientific.

We pulled in down at the Akuna Bay Driftwood Cafe. As expected, we were pretty much the only ones there.

The coffees, unfortunately, weren’t espresso.  Not entirely sure, but my guess was drip filter coffee.

I amused myself by feeding the fish instead, as they were slumming around the pier. I suspect they get fed well on weekends. Perhaps they haven’t learnt to count days of the week. 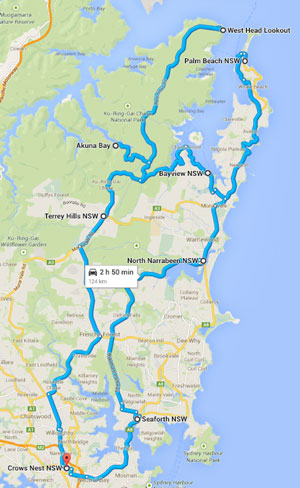 We rode back the way we came, rather than taking the longer, bumpier route up to Terrey Hills.

Then we zipped up the hill to West Head.

Monday is also happily free of cyclists. I guess it was worth the $11 entry fee just for that small mercy.

The view at the top, as always, was worth it too.

It was a stunning day and we – almost – had the lookout area to ourselves.

It’s so peaceful up at the lookout, I could have happily stayed longer, just zoning out. Even the low drone of the occasional boat passing below seems to fit. 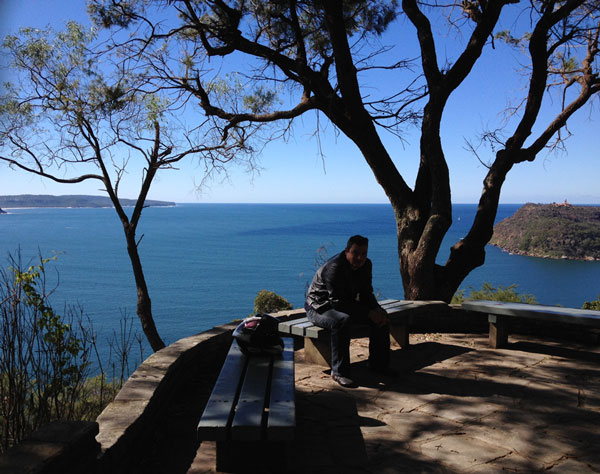 Zorro relaxing at West Head lookout, soaking up the peace of an empty Monday

I looked longingly across the blue stretch of Pittwater to the Boathouse at Palm Beach and reminded Zorro that he’d promised to take me there for lunch or brekky one day.

The day had warmed up a lot and I was happy to hop back on the bike and feel the wind again.

Our new friend, the ranger, was busy chatting to someone as we exited, so I didn’t get the chance to give him my assessment of the Akuna Bay coffee.

The trip up the peninsula to Palm Beach was smooth and free of traffic, although there were some roadworks on the way.

We had lovely (though expensive) burgers and fish & chips at the Boathouse, looking back up at the West Head lookout from below.

Zorro remembered to adjust the suspension settings before we headed home (something else he’d been promising  me for a while). The BMW allows you to dampen the settings to create a softer ride. Hallelujah!

Zorro said he could feel the difference immediately.

Me? Not so much. I’ll need to hit a few good bumps before my butt can decide…