I began riding pillion over 2 years ago, with my partner of 13 years. Finally, after all this time, we went to visit my family on the back of the bike. I was nervous about it – it felt like introducing a new boyfriend to them. Sure, they’ve known about ‘us’ for some time, but actually seeing me dressed in the gear was making it a reality.

The reason for my trepidation was a long-held memory of the first time I rode pillion, back in my late teens. When my boyfriend bought a motorbike my father stated very sternly, “No, you won’t be getting on the back of that thing.” “That’s ok, Dad”, I replied meekly, “I have no intention of doing so.”

It was true. Briefly.

The very next day my mother came to my room carrying a denim jacket that I hadn’t worn for a couple of years. In a conspiratorial whisper she suggested “You could wear this to go on the bike.” Followed by “Go on, it’s fun.”

Turned out that Mum had fond memories of riding pillion with her brother when they were much younger. Before she met Dad.

And so I went riding. (Shhh, Dad still doesn’t know about that!)

Back to the present day…

‘Scuse the pun, it was indeed a day of presents as we have several family members with birthdays in July and today we had a big lunch to celebrate them all.

It was a nice warm mid-winter’s Sunday (at last!) and the restaurant was out in the Hills district, so it was my suggestion to take the bike. I haven’t been on it since February.

We gave ourselves some extra time and went out through Galston and Arcadia. Pretty gardens and 5-acre lots still abound in the area, so it’s nice to cruise through.

Biviano’s restaurant at Dural was quite nice. It’s located in behind Hargraves Nursery and looks more like a fancy function centre than a neighbourhood restaurant. There were a number of very large groups that made our full-family gathering look pretty tame. 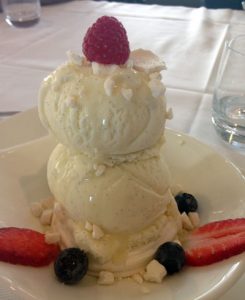 Zorro & I arrived first. We left our jackets locked up in the panniers and stuffed our helmets in a corner.

Seated at the table wearing a nice knit top and fancy necklace, I could hide my kevlar-padded jeans and riding boots under the long white tablecloths and look ‘normal’.

We enjoyed a nice Italian lunch and indulged in a stack of super creamy vanilla bean ice cream (in lieu of wine, as we both needed to stay upright…)

I don’t think Mum or Dad realised we’d come by bike until it was time to leave and we brought out the helmets. The questions started with: 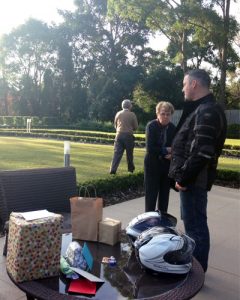 Uh oh! Dad has turned his back and Mum’s looking disapproving.

“Ooh, why did you bother coming on the bike?”

“How often do you do this?”

“How on earth did you bring the presents?”

(This last one wasn’t such a bad question – trying to cart along a box the size of a large 4-slice toaster was a challenge, but not one that Zorro and an occy strap couldn’t fix!)

Fortunately most of them didn’t hang around while we geared up. It’s certainly quicker to jump in your car, belt up and drive off.

My sister and brother-in-law stayed to chat while we layered on back protectors and balaclavas, fastened our jackets, clipped on helmets and headsets, and squeezed into gloves.

I think I heard them utter the word “palaver”. Fair enough. 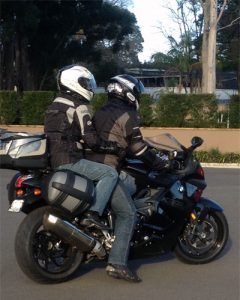 At least there was no safety lecture. Or jokes about falling off. They were cool with it. My sister even snapped a picture as we left.

So the ice has been broken. There’ll be no more trepidation.

In fact we might be riding to family gatherings more often.

Tho’ perhaps not my nephew’s upcoming wedding…