Any Sydney motorbike rider who’s ever headed North of the Harbour Bridge would know about “the old road”.

It’s how the locals refer to the Old Pacific Highway, which many moons ago was the Pacific Highway – the only route up to Gosford and Newcastle. Much of it is single lane as it winds around the hilly contours of Hawkesbury sandstone immersed in thick Aussie bushland.

Must have been a hellish drive in Summer holiday periods. 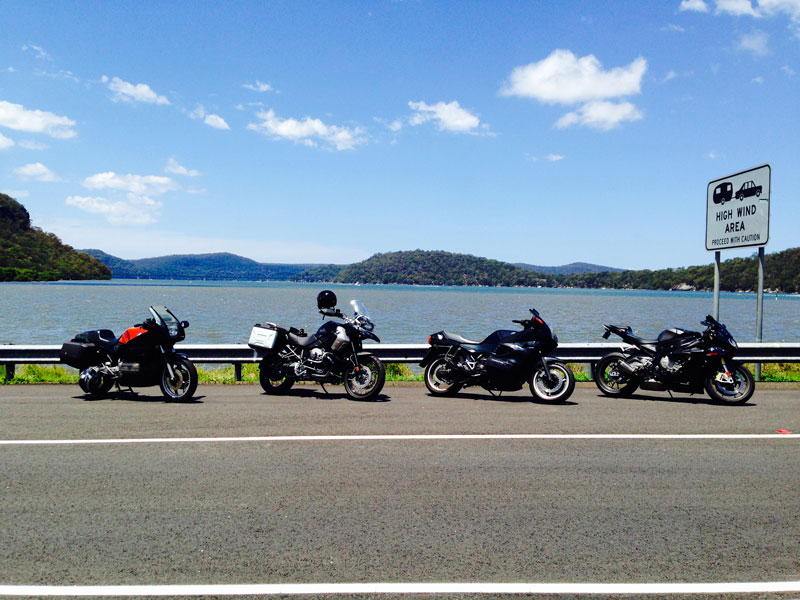 On the Old Road, just north of the Hawkesbury River Bridge (before the best bit starts)

Almost no cars travel it now, since the F3 (now known as the M1 Pacific Motorway) was built to shave hours off the travel time. All in all, it’s perfect for motorbikes. It’s used so much that there are warning signs along the way specifically for riders – when to watch for slippery bends, and even a sign reminding you how to corner safely.

The worst part of getting to The Old Road is fending off the urban traffic on the way. Especially on Saturdays when the roads all day from 9-5 look just like the weekday peak – but with less-experienced drivers.

Being a warm afternoon, the S1000 started heating up from all the stop-start action.

The start of “the old road” finally allowed us to ‘give the horse its head’ and open up.

We met up with a friend who lives close to the road. He’s ridden those bends more times than I’ve cooked pasta and knows the road intimately.

We followed his lead on the corners.

He told me he carried a pillion rider for so many years that his riding style never reverted to single rider racing style. I wonder if that will ever be the case for Zorro…

We stopped in at The Old Road Café, more commonly known as the Road Warriors, for a drink of water. (Gee, they need to update the cover pic on their website, check out the vintage of those sports bikes…!)

The café is an almost compulsory stopping place for all travellers on this road and often crowded with motorbikes. Late in the afternoon it was pretty quiet and we didn’t hang around.

Not far beyond the Road Warriors is a small section of road that Zorro has always hated.

There’s a depression in the road surface. Subsidence perhaps. It’s not a dip as such, but an undulating section on an easy bend that can catch you by surprise.

At last, the council or roads authority have finally placed a warning sign to alert riders, and even painted the depression with white criss-crosses. Zorro slowed in time and, instead of jarring us, the bike floated into and out of it nicely.

I quite enjoyed the sensation.

Back up the corners to Cowan:

The rest of the trip went smoothly, especially my favourite uphill curves from Brooklyn to Cowan.

I’ve been experimenting with where to hang on, and how to brace on downhill braking sections. Pushing back against the tank seems best, as it keeps us close so there’s no counterweight (as happens if I hold on behind).

It’s something to keep working on with future rides…

« A different kind of riding
Getting my gear on »