My other half has been motorbike-mad for some years now, and hankering for me to share some of his passion. He reads bike mags. He has bike mates. He goes riding most weekends with some or all of them.

I’ve stayed home. Worried a little (can’t help it!). But generally happy to have some time alone while he was out perfecting his cornering techniques.

There have certainly been times when I felt a bit left out of the action.

So the conversations began…

The borrowed helmets were never right. Most floated on me, which is as dangerous as having no helmet.

I finally bit the bullet: “We’ll just have to buy one.”

My other half – let’s just call him Zorro (for reasons that shall remain secret, so don’t ask) – was thrilled. His second favourite retail outlet is a bike shop (his first love is a hardware store).

The sales guy at the bike shop in Artarmon was friendly. And patient.

I had an idea of what I wanted, but only as far as looks:

Not black.
Definitely not pink.

I started with the ‘cheap’ ones because I wasn’t convinced it would ever get more than a couple of outings. 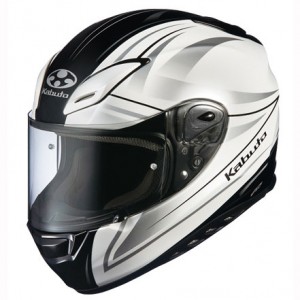 My new Kabuto. Head protection has never looked so good…

After trying several – each time gradually going up in price – the winner was a white and silver Kabuto Aeroblade helmet. It felt much lighter than most of the others and was a great fit. But what really clinched the deal? It has little gaps inside so you can slide your sunglasses on with ease. How cool!

Ok, so it wasn’t in the cheap range, but at least I won’t hate wearing it. And who knows, maybe I’ll even get to like this gig…

The funniest part of this whole story? We had dropped the car in for a service first and Zorro happily walked a couple of kms – in the midday sun – to get to the shop. And happily waited and caught a bus home. All these things are anathema to him on any normal day.

Our first ride – West Head views on a Sunday »