The time has come for our first ride together. 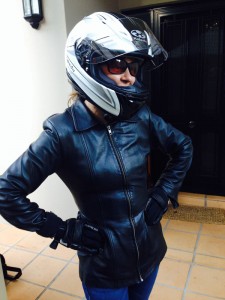 In my new helmet & ‘temporary’ attire

I’m all kitted up. Kind of.

I’ve got my brand spanking new helmet and teamed it up with a pair of jeans (ok, so they’re Armani), a leather jacket (admittedly, it’s only a dress jacket, but it zips up the front and sits hip-length), my old leather boots (they’re Ferrari – Diana Ferrari, that is – but they’re almost knee length with a very low heel) and borrowed gloves that are two sizes too big.

Zorro’s not happy with my lack of real protective gear, but I’m not convinced I’ll be back for a second outing at this stage.

One of the things putting me off is that the bike in question is a superbike – the BMW S1000RR. 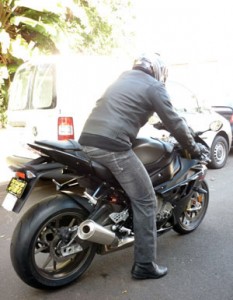 Awesome machine for sure.

But not really intended for riding 2-up. I’ve even heard it has the smallest pillion seat of any bike. Just as well my bum ain’t too big…

I’m not a complete newbie to pillion riding. I had ridden a number of times in my youth (too many years ago to mention) on the back of a Kawasaki 1000 and a Yamaha FJ1100. So I at least know the basics of leaning with the bike and, most importantly, to hang on!

On the other hand, Zorro has only taken a pillion on a couple of short rides, so I was feeling more concerned about him than myself.

He sensibly selected “rain mode” on the S1000RR, which restricts the throttle and even the amount of lean.

It’s meant to be idiot-proof.

The first two corners still felt awkward, though I couldn’t tell if that was me or the rider.

Underway, I wrapped my arms around Zorro’s jacket and could thankfully check the traffic and upcoming corners to each side of his helmet.

Better yet, I could even keep an eye on the speedo if I sat higher and peered over his shoulder. All good.

Braking isn’t so comfy as I slide forward into him (and onto my crotch, right on the nasty little diamond ridge on the seat. Who designed that??).

The foot pegs are set high so I’m in a real jockey position, meaning there’s little opportunity to press against the pegs to hold myself.

I played with having one hand forward and one behind, gripping the sharp edge of the tail, but felt unbalanced. Eventually I settled on keeping both hands forward and pushing against the tank as the bike slowed.

Once we found a more open road, I began to appreciate the bike itself.

It’s nimble and beautifully poised. Despite the small seat, I felt quite balanced and secure.

We were joined by some friends, another couple quite new to riding 2-up. 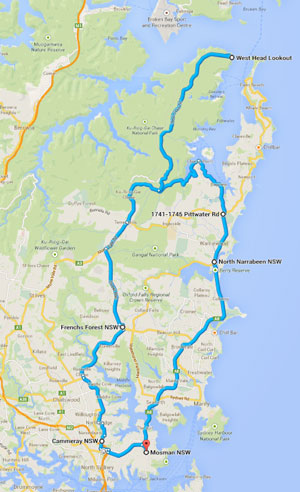 The route – North Sydney up to the northern beaches, then West Head via Bayview and back via Frenchs Forest

It was a beautiful sunny day and we headed up to Pittwater and took the turnoff to Church Point.

The run up to West Head can be a nightmare in a car on weekends, thanks to the number of cyclists that pedal up the challenging hills there. Being on the bike, I could see it was easier to “share the road” with them, but I was still nervous about meeting cars coming the other way who might be risking things while overtaking cyclists.

We stopped and I gingerly swung my leg over the bike to dismount. As my legs straightened my knees screamed in agony. My crotch begged for mercy as I took my first bandy-legged steps, a la John Wayne.

Then I cracked up laughing as I saw my friend do the same when she jumped off the back of their Honda VFR800. 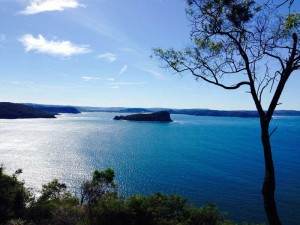 Looking down to the aptly named “Lion Island”

The view from the top is certainly worth the trial especially on such a glorious Sydney day.

Lion Island sits proud, far below us on the left.

To the right is the long, gentle sweep of Palm Beach up to Barrenjoey.

And we’re surrounded by the sparkling waters of the Hawkesbury River, Pittwater and the Pacific Ocean.

Wow, the view from West Head is breathtaking.

A few photos are taken (well, quite a few) before it’s time to get back on the bikes. Gingerly… Ouch….

That’s been enough for my first ride. Once the aches subside, I’ll decide whether it was worth it…