It’s been a very “Indian Summer” in Sydney and March has been easily as warm as February.

We didn’t decide ’til mid-morning to head out for a ride, and by then it was already edging 26C.

Not being too sure if we’d get too hot, I suggested we head up the northern beaches for a cooling gelato at Dee Why or even Avalon if we made it that far.

Bike gear is not made for the heat. Especially black gear. I’d gone for the practicality of dark colours (ie. won’t show the dirt) but forgotten about the reflective qualities (ie. none).

Oh well, it will be good in winter…

Yep, let’s go for gelato. ASAP. Dee Why is calling. 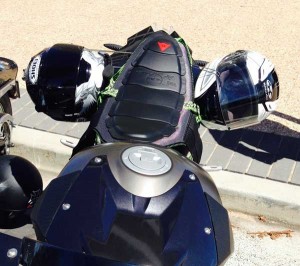 I discovered the best thing about hitting the beaches on a hot day with a motorbike is that there’s plenty of parking – Motorcycle Only spots were plentiful!

But we certainly didn’t want to carry all our gear. So Zorro hooked up the helmets through the seat hooks, and it looked pretty cool with the helmets jutting jauntily from each side. (Creating some nice symmetry for the S1000’s funnily asymmetrical headlight configuration.)

I also popped my back protector (which I forgot to mention in the gear post, but it’s only a temporary one I’ve borrowed from Zorro) across both seats to keep the sun off.

(I know, didn’t think that one through very well, did I? Yes, the back protector was like a hot-water-bottle against my back when I did don it again. Live and learn!) 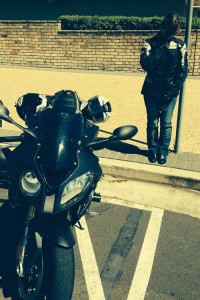 You can’t tell from this pic that it was nudging 30C. I had my jacket on, wondering if the back protector would be ok on the OUTSIDE…

The gelato (my favourite, hazelnut!) offered a small reprieve, while we jealously watched people on the sand who’d come prepared for the beach. Wearing white. And bikinis. And jumping in the waves.

Not jumping on the back of a steaming black motorbike.

But we’d cooled down enough to decide we’d keep going.

And so we found ourselves, once again, heading up towards Church Point. With a little more speed, the airflow did keep us cool, and I thought to myself: “yep, this feels good.”

But I don’t know that it will feel so good in winter…!

Back to Sydney – just…

We headed home via Roseville Chase and stopped at Neutral Bay for something to eat at the very sexy new joint called So-Cal.

The name is short for Southern California, and sitting out on their back deck on a day like this, with cold Coronas and a plate of quesadillas, we felt transported to San Diego.

And then it was time to go home.

But the bike had other plans…

She wouldn’t start! Zip, zero, zilch. No motor turning. Barely a sound as the key was turned.

Some nice guys in the nearby cafe offered to push start it – the wrong way up one of the busiest roads in Sydney – while the lights were red and I was standing by to slow any traffic that might come around the nearest corner.

They pushed him to safety and I watched as Zorro and the bike rolled down the hill. To the roundabout. And beyond. And out of sight!

Eventually Zorro rang me. The bike refused to start. It seemed the  kill switch was stuck in place. (This was not the first time this had happened.) 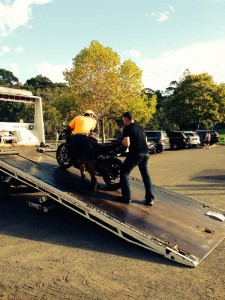 The S1000RR being pushed onto its oversized tow truck

So I picked up all my gear and trudged back home in the heat to collect our car, while Zorro called a tow truck.

It was pretty sad watching the S1000 being pushed onto this oversized tray and tied down like an animal.

But I was very grateful that she’d died close to home, and not at Church Point – where we barely had phone reception, and would have been stuck in the blaze of midday sun on a day like this, waiting much longer for that tow to find us… 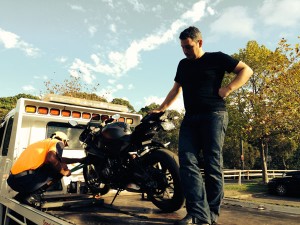 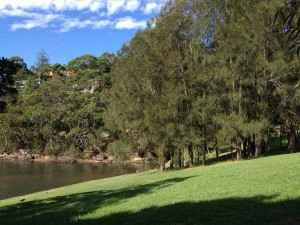 Picturesque place to break down, at least

Update: the kill switch had indeed been stuck. The local BMW forums speculate that they can’t handle the Australian heat. BMW replaced the switches (on both sides of the bike) with a new style, under warranty (which had expired).

Hopefully it won’t happen again. If we’re ever foolish enough to go out again on a day like that…!

« Getting my gear on
Mixing it up with a multistrada »