Saturday, June 28: today was the big test. The test ride, that is. Zorro and I took a BMW K1300S for a test ride from Procycles at Hornsby.

I hopped off the S1000RR to immediately admire the difference in seat-size of the K1300S sitting in the showroom while Zorro filled out paperwork. The seat certainly looked comfy. Not being a big admirer of the shape of sports bikes, that was about all I noticed.

But Zorro seemed excited about other features, like the shaft-drive, and the Akrapovic titanium sports silencer (which won’t be standard on our bike). He also salivated over the sexy paint job and fancy footpegs.

You see, the only available demo bike was the “30th Anniversary Special Edition”. It’s not the one he ordered, as there’s a fair price-hike on the Special Ed. But I was assured that the seat would be the same… 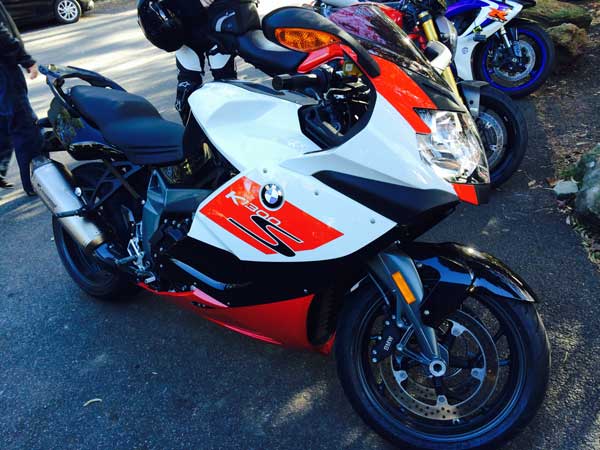 Not the best day to travel the Old Road

With our starting point being George St, Hornsby, it made sense to head up to the familiar curves of the Old Pacific Highway.

But at the lights at Berowra, we hit a problem. The F3/M1 had been closed northbound due to a truck on fire. All traffic was being diverted at Berowra. On to the Old Road. The cops directing traffic warned us it wouldn’t be a good time to ride. But we pressed on.

The traffic didn’t seem too bad, considering. And the cars were being allowed back on to the freeway just after the Hawkesbury crossing.

As we descended the bends towards Brooklyn there was a cloud of acrid smoke rising above the trees from the burning truck way below. I held my breath as we rode through it, for once wishing that I was in a car with the windows closed for protection.

PS. We found out later that the truck had been carrying wine. Perhaps I should have inhaled after all… 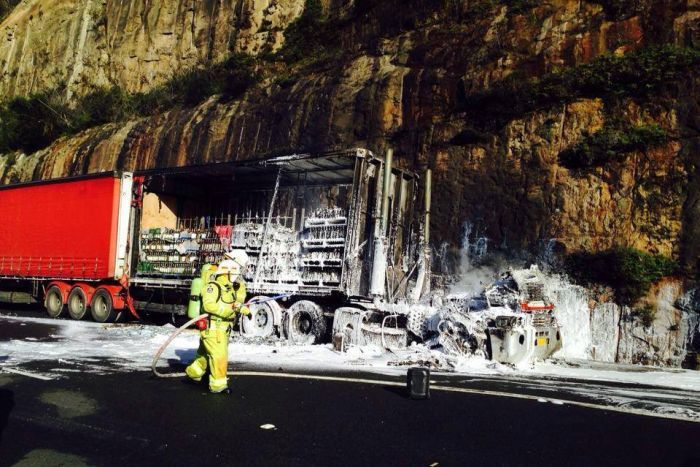 The burnt out shell of the truck’s cabin – it must’ve burnt fiercely. The driver escaped without injury. Not sure what happened to the wine… (Photo from the Westleigh Fire Dept).

How to do a real test-ride

After the smoke cleared and the road cleared of cars, the ride went well. We stopped at Road Warriors for a coffee and everyone wanted to know “Do you like it?”

I had some reservations. That big comfy seat meant there was room to move. And move I did. Mostly sliding forward against Zorro. It felt like I wasn’t sitting where I was supposed to. And I couldn’t see as easily from my high little perch on the S1000. And my leg position felt a little strange.

There was only one solution: “We need to ride further.”

So we added the Mangrove Mountain loop. The further we rode, the more I began to enjoy it.

By the time we returned to the shop, an hour and a half later, I was nodding in agreement. Zorro was pleased. He loved it too.

Now we just have to wait for the new one to arrive.

And meanwhile Zorro needs to sell his darling S1000RR.

I hopped back on to my little diamond-shaped, diamond-hard pillion perch and thought “Aah, feels like home.” I’m going to miss her, you know…

« We’re going to need a bigger bike…
How cold is too cold? »