Finally, Zorro has picked up the new bike (a BMW K1300S) and we’re taking it out together for our first ever weekend ‘road-trip’. Zorro has already put 500kms on the clock, riding solo. And he’s already fallen in love with it. Hopefully I will feel the same…

We made last-minute plans to head to the Hunter Valley for the weekend. Just one night (it wasn’t easy to find accommodation that allowed a single-night stay). We’d also invited some friends to accompany us in their car. It wasn’t strictly a backup plan, but secretly I figured I could grab a lift home with them if it rained, or got too cold.

I spent Saturday morning anxiously watching the radar. The weather radar, that is. We’d woken to rain, and it didn’t seem to be abating. We decided that 11am would be the cutoff time, when we would have to take our car instead.

11am arrived: We moved the cutoff time to midday.

12pm came and went: We decided the absolute, final, no-question-about-it, cutoff time would be 1pm.

At 12:30, the sun came out and the radar showed that most of the way was clear, or clearing. 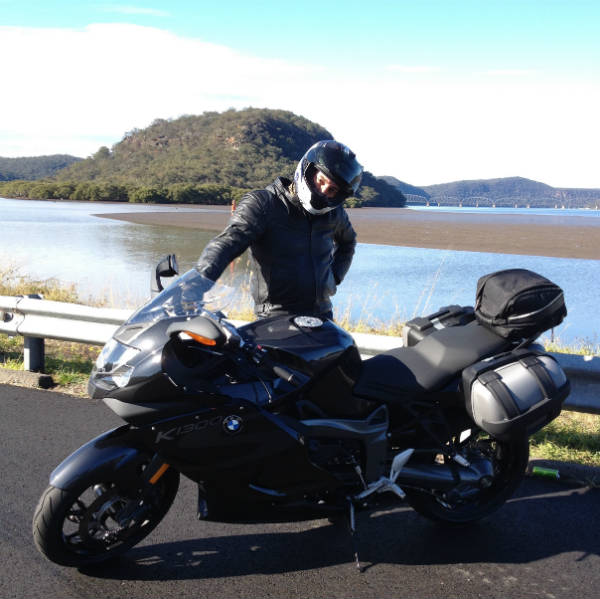 “Our” new BMW K1300S, at the Hawkesbury River Bridge

It turned out to be a nice afternoon to ride. The roads were empty. The scent of wet wattle greeted us as we cleared the city outskirts.

We reached Road Warriors cafe just before 2:30pm. We were the only bike there! The ladies in the cafe, and the resident dog, were all pleased to see us – they’d had a very quiet morning because of the rain.

When another bike arrived, we headed off. Let someone else experience the rare (strange) feeling of being alone at the Old Road Cafe. 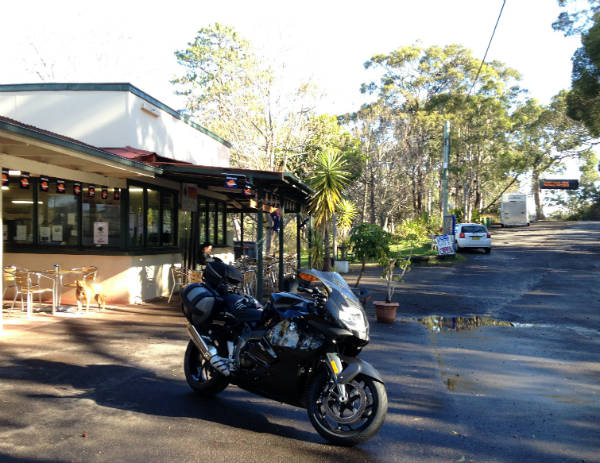 A rare experience – being the ONLY bike at Road Warriors

Clouds were building up dramatically but the road seemed to just skirt around the edges of it most of the way. It began to drizzle just as we came upon the quaint little village of Wollombi. So we stopped in at the Wollombi Tavern, happy to find the fire on inside, and settled in for a drink (just lemon, lime & bitters, not the infamous Dr Jurds Jungle Juice).

Then the doors burst open and a rowdy group broke the peace and quiet. No, not bikers, but girls out to celebrate a hens night. The cheap pink tulle veil and plastic tiara looked so out of place in this rustic country pub. Time to leave them to their revelry! 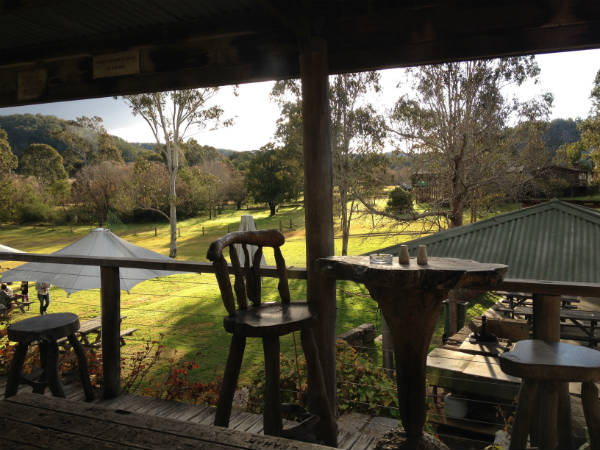 The view from the Wollombi Tavern

[Not quite] The Great Zombie Apocalypse Moment

The rain held off, even though the huge storm cloud to our west looked awfully threatening as we rode towards Cessnock and the Hunter Valley.

Just as we passed an old cemetary the sun dipped beneath the cloud. If ever I wanted to create a background image for a Zombie Apocalypse poster, there it was. One of those moments where I wish I were in a car instead and could easily grab my phone (or camera) to take a shot.

Then that macabre image was replaced by my favourite effect that only occurs in late afternoon in winter: the lowering sun bathing everything in golden light and long shadows. 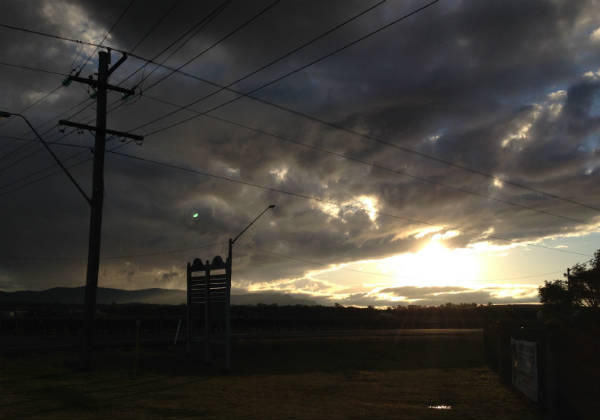 A Night in Lovedale

We’d booked into the lovely Rosedale B&B at Lovedale and were treated as soon as we arrived with glasses of port and a bowl of chocolates, enjoyed in front of a slow-combustion fireplace. (Update, July 2015 – sadly, the Rosedale B&B is no longer open.)

For dinner, we piled into our friend’s car and headed to an isolated winery restaurant further up the road. I was grateful to have Plan B available as a real pea-souper fog had descended and we could barely see the road on our return from dinner. 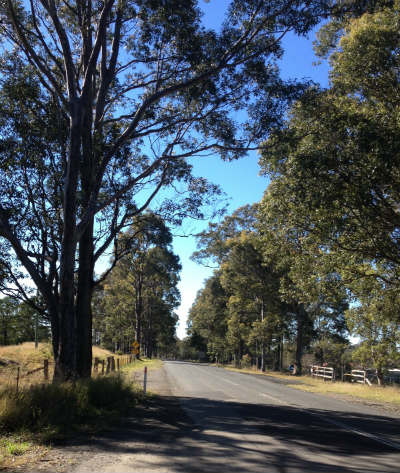 On Sunday we were greeted with brilliant blue skies. Barely a cloud to be seen.

After a late brekky and coffee at nearby Mojo’s (on the beautifully named Wilderness Rd) we set off to Singleton and then down Putty Rd. The countryside along the way is gorgeous, changing from vineyards, to farm fields, to scrub, and then to spectacular tall trees alongside meandering creeks. (The creeks around here have great names, like Boggy Swamp Creek, Long Weeney Creek, Dumball Creek and Pickle Bottle Creek – the mind boggles!)

The Putty Road is one of the longest, windiest roads anywhere near Sydney. Today was my first trip (on 2 wheels or 4) along this notorious stretch of road that is so popular with bike riders. Unfortunately we encountered a long, slow row of cars in the curviest section and were unable to pass. But once we’d cleared them, I quite enjoyed the twists and turns, marvelling at how good it felt on the K1300S (and very glad I had never attempted it on the S1000RR).

Then, just as I was really getting into the ‘zen’ of it… Zorro took a particularly nasty corner just a little too wide. To compensate, he had to lay the bike over – far enough that his boot scraped. I heard it, although I’m not sure I actually felt it. But it Freaked Me Out.

We weren’t on intercom at the time, and I chose not to connect. I wasn’t quite sure what I would say. I was angry, scared, and didn’t want to keep riding. I was ready to quit riding, quit blogging, get him to sell the bike again. (Yes, my freaked out mind was in overdrive. As it turned out, I should have spoken to Zorro sooner – he wasn’t at all fazed by what had happened and assured me the bike still had plenty of lean leftover. Not that I’m keen to encounter it myself… but he did ease my mind.)

So we stopped for a break at the Grey Gum Cafe. It sits exactly halfway between Singleton and Windsor and is about the only place around offering refreshments. Hence it is packed with bikes. We ordered burgers and shakes and sat at one of the outside tables.

As is common with motorbike riders, who you are and where you come from is secondary to what you ride. Bikers prefer to strike up conversations about their bikes and the day’s ride, and that is enough of a connection. So we enjoyed some banter with some rather interesting characters. Like the guy who had a run-in with the cops for wearing his favourite 20-year-old helmet (that isn’t compliant with more recent safety standards). And the guy who takes his dog with him on the bike. 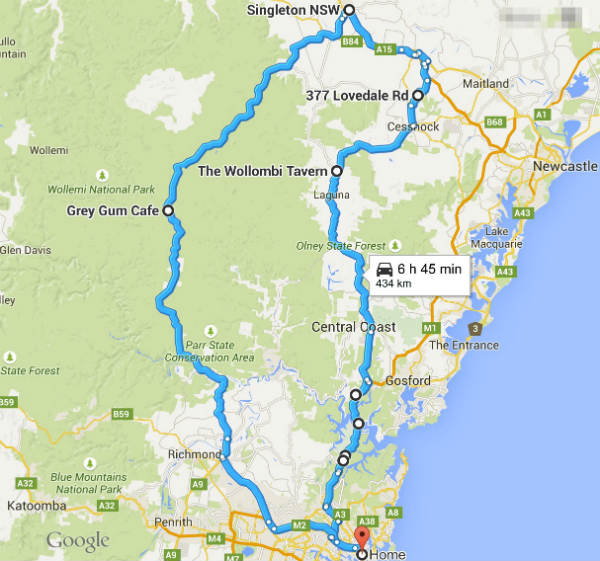 Map of our first big ride on the K1300S. 434kms Sydney-to-Hunter-Valley-to-PuttyRd

Yeah, ok, I’m over my first scare. Let’s keep the bike and keep on exploring. And blogging…